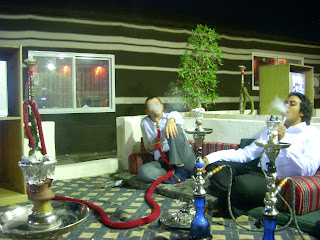 After the wedding we went out for a few hours of Sheesha and talked and laughed late into the night about the evening's events and antics. One of my friend smoked the largest "hubbly-bubbly" I have ever seen; I called it the kilo-sheesha (in red).
Posted by Nathan at 1:43 AM 2 comments: 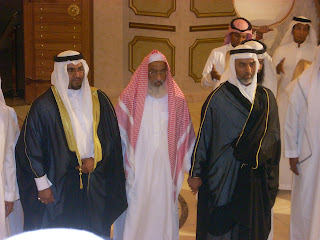 One thousand congratulations to my friend who was just married! Last night, I had what may have been a once-in-a-lifetime chance to attend a Jeddah-style Saudi wedding. Pictured above are the groom (Arees) his father and grandfather as they began the festivities. 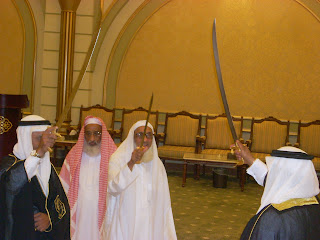 All of my Saudi friends insisted that Jeddawi (people form Jeddah) weddings were more fun than other weddings because they are so lively (at least on the men's side, I have no idea what the women were doing the whole time.) In this picture, the father (left), son (right), and two grandfathers (I think...) are dancing with swords. The old man in white looks was having a great time! 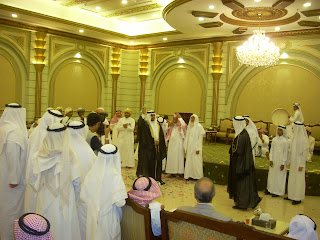 In Jeddah, as in all of Saudi Arabia and much of the Middle East, the culture of keeping men and women separated extends even to weddings. The men danced and celebrated with the groom from 9:00 pm to midnight while the women, unseen by us, were celebrating in kind in another large room. Rumor has it that when the men are away they take off their Abayas and wear the most beautiful and colorful dresses, but I cannot confirm this from my personal experience. 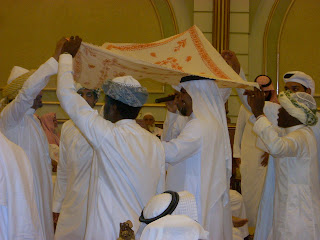 I don't know what the meaning of this tradition is, but it seemed important so I took a snapshot. Again, more smiling and more dancing. 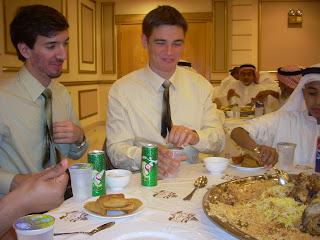 The food was excellent of course! Lamb and rice is typical Saudi style and the tender, juicy meat was cooked to perfection. Notice that there are only three spoons at a table sitting eight people. Use your hands, silly American!
After the meal, the water stopped running in the bathrooms for a while (local pressure drop), leaving dozens of guests standing around awkwardly with rice dripping from their fingers. We were in Jeddah! 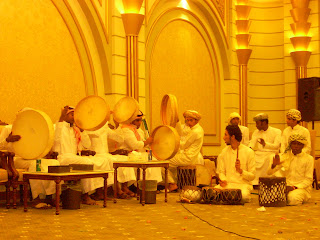 The band, pictured here, also doubled as a pep squad to keep everyone excited and involved in the festivities. I got pulled into the dancing more than once - they wanted to be sure that I, an obvious foreigner, felt completely included in the celebration. 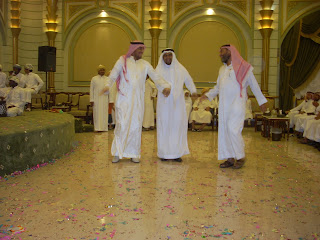 I have never danced with men before, and I still have some natural American tenancies to shy away from these kind of things. But, in the interest of heightening my cultural awareness, making new friends, and having loads of fun, I overcame these cultural barriers. Shookran shebab!
Posted by Nathan at 7:08 AM 10 comments: 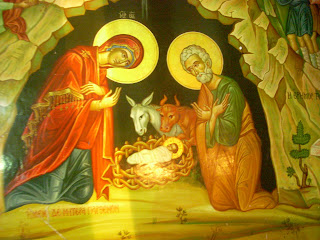 After visiting Hebron (El Khalil), I caught a taxi to Bethlehem to see the famous Church of the Nativity and spend the night before returning to Amman. The old church was beautiful to see. 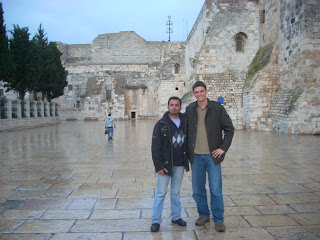 I talked with both Christian and Muslim Arabs while wandering and reflecting in the church. Bethlehem is a place where people can live side-by-side in mutual respect without the religious tension which is felt in some other Middle-Eastern countries. This peaceful co-existence is further evidenced by the sunset-framed silhouette of a mosque's minaret across from the church. 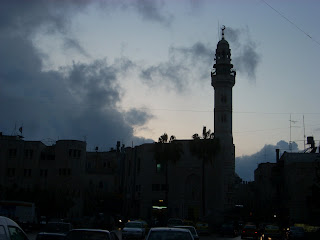 After meeting the priest of the church, one of my new friends insisted that I had to cross the street and meet his Imam too. : ) 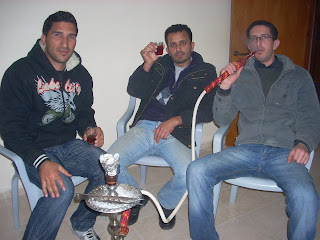 After a full day's travel, I spent much of the night conversing, eating, smoking sheesha, and meeting the extended families of my Palestinian friends. Their hospitality was unbeatable - as a guest, I was welcomed warmly and treated to the best they had to offer. 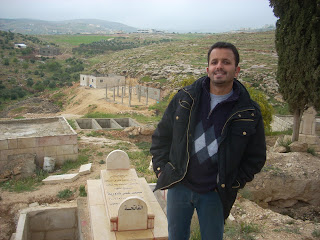 But even in this peaceful suburb, the consequences of conflict and political unrest still loomed. Before leaving town the following morning, my friend insisted that I see where his little brother's final resting place lay - his life cut short by a bullet during a fight between Israeli soldiers and Palestinians some years ago.
Posted by Nathan at 1:57 AM 2 comments:

Yesterday was Easter, the most important of the Christian holidays. Though Islam and Christianity differ about other details of Jesus' life and mission, we agree on these important points: (1) he is not dead (2) his is with God in heaven. These are the Koran verses which describe the Easter we celebrated yesterday. n
سُوۡرَةُ مَریَم
وَٱلسَّلَـٰمُ عَلَىَّ يَوۡمَ وُلِدتُّ وَيَوۡمَ أَمُوتُ وَيَوۡمَ أُبۡعَثُ حَيًّ۬ا (﻿٣٣﻿) ذَٲلِكَ عِيسَى ٱبۡنُ مَرۡيَمَ‌ۚ قَوۡلَ ٱلۡحَقِّ ٱلَّذِى فِيهِ يَمۡتَرُونَ (﻿٣٤﻿)
Maryam
"Peace on me the day I was born, and the day I die, and the day I shall be raised alive!" (33) Such was Jesus, son of Mary: (this is) a statement of the truth concerning which they doubt. (34)
سُوۡرَةُ آل عِمرَان
إِذۡ قَالَ ٱللَّهُ يَـٰعِيسَىٰٓ إِنِّى مُتَوَفِّيكَ وَرَافِعُكَ إِلَىَّ وَمُطَهِّرُكَ مِنَ ٱلَّذِينَ ڪَفَرُواْ وَجَاعِلُ ٱلَّذِينَ ٱتَّبَعُوكَ فَوۡقَ ٱلَّذِينَ كَفَرُوٓاْ إِلَىٰ يَوۡمِ ٱلۡقِيَـٰمَةِ‌ۖ ثُمَّ إِلَىَّ مَرۡجِعُڪُمۡ فَأَحۡڪُمُ بَيۡنَكُمۡ فِيمَا كُنتُمۡ فِيهِ تَخۡتَلِفُونَ (﻿٥٥﻿)
Al-E-Imran
Behold! Allah said: "O Jesus! I will take thee (blogger's note: muatwafeek means literally "to die" but is translated "to take") and raise thee to Myself and clear thee (of the falsehoods) of those who blaspheme; I will make those who follow thee superior to those who reject Faith, to the Day of Resurrection; then shall ye all return unto Me, and I will judge between you of the matters wherein ye dispute. (55)
Jesus is alive, and he has shown us the way to heaven, this is why we celebrate this Easter!
The full story can be found here in English or Arabic.
Posted by Nathan at 1:20 PM 5 comments:

This is Good Friday, the Friday before Christianity's most important Holiday, Easter. Good Friday was actually the darkest and most terrifying period which the early followers of Jesus ever experienced.
There were no heroes that day. The disciples acted clueless and cowardly, the Roman guards were horribly cruel, the governor was contemptibly corrupt, the religious leaders unbelievably evil, and at the end of that terrible day Jesus lay buried in a tomb.
So why do Christians call it Good Friday... ? Because amazingly, death is not the end of Jesus' story.
If you are interested, the full story can be read here.
Posted by Nathan at 2:18 PM 3 comments:

Nathan
KAUST, Jeddah, Saudi Arabia
Email: saudi.aggie@gmail.com I am a KAUST Masters student, and I hope y'all enjoy the flavor of my initial impressions of the new Middle Eastern culture I have become a part of.